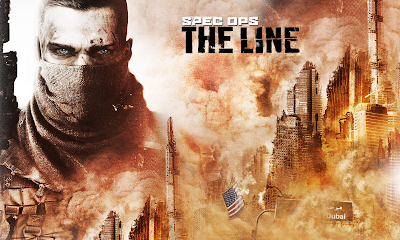 So I haven't  heard a lot about Spec Ops:  The Line but what I have heard was very good.  I got it on sale for just a couple of bucks because I was curious and $2.49 is perfectly within my price range for a game I'm not going to finish.

That's right, fellow gamers, it's time for another installment of Unfinished Re--

Spec Ops:  The Line is one very beautiful game.  I don't normally worry about graphics in video games as I believe gameplay should always trump anything else.  But sometimes the graphics are done so well that you can't help but notice it and in return comment on it, similar to my feelings on the movie Drive.  What I've played of the game, everything takes place in the desert, so you'd think brown would be the overall feel of the game.  But it's actually not.  The lighting is so awesome that the game has a vibrancy about it that is lacking in a lot of your typical action games such as Call of Duty or Gears of War.  It reminds me of Bulletstorm, actually (which I also haven't finished).


Which is actually quite funny because this is one dark game.  Not in lighting but in tone.  The opening sequence you shoot down a million helicopters with an endless supply of bullets and no cooldown, something that has been missing in action games for a long time now.  Fun, right?  Absolutely.  But then you get to the killing of people, up close and personal.  In this game there's something that makes the enemy feel very real and I genuinely feel bad every time I decapitate someone with a shotgun blast to the face.  But as the main character says if they shoot at you first, then you better shoot back (paraphrase).

So the story seems pretty cool if a little Apocalypse Now-ish, where a Colonel and his battalion, the Damned 33rd, have gone rogue.  But there seems to be more to it than that as a CIA agent comes into the mix and is helping insurgents kill me and more importantly the Damned 33rd.  Also, this game is really exciting and I can't wait to play more, where Apocalypse Now bored me to tears.

The play mechanics are pretty sweet.  It's a third person shooter, so cover is involved, but the cover doesn't make me angry like it does in the second and third Mass Effect games or Gears of War.  Cover is essential, because you will die without using it, but you can actually move from place to place pretty readily without immediately getting your head blown off.  Also, directing your squadmates seems to work better than in most games, although sometimes they shoot like Imperial Stormtroopers which can cause headaches and unnecessary deaths.

Despite the opening scene of unlimited ammo, the rest of the game is kind of sparse.  I found myself giving up my guns quite a bit in favor of less awesome guns, which had more rounds, which makes the battles more intense as I'm constantly pushing forward on the battlefield just to get to a weapon an enemy has dropped.

One mechanic that is just as annoying now as it always has been is the checkpoint system.  I understand certain ideas behind not having quick save and unlimited saves but I find that the older I get the less time I have to spend to repeat stuff.  I think I might start playing on easy modes from now on.  We'll see.  I'd probably finish more games that way.  But I have to say that the checkpoints are at least pretty close together.

Anyhoo, I highly recommend Spec Ops:  The Line as it seems very fresh.  Then again I don't play too many straight on shooters, so I'm not really sure if it's fresh or not.  But for me it is and that's what counts.